There’s No Excuse for Speeding 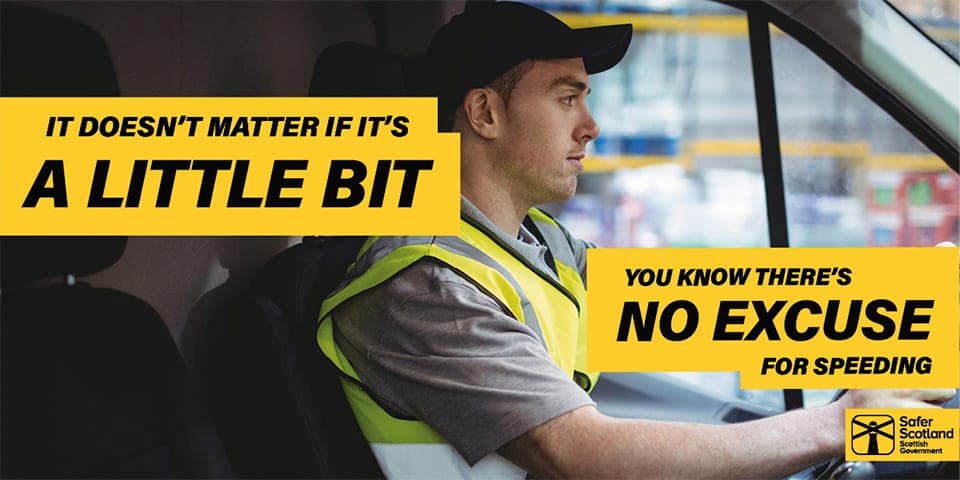 Every year in Scotland there are too many fatal accidents caused by speeding. Driving fast can impact innocent road users and affect people’s lives forever.

It’s up to all of us to take responsibility and slow down on our roads.

What you need to know

There’s no excuse for speeding - there are devastating consequences.

Latest figures show excessive speed was reported as a contributory factor in 21% of fatal accidents.The majority of people (at least occasionally) exceed the legal speed limit:

The Scotland-wide campaign highlights some of the excuses commonly used by drivers to justify their speeding behaviours, while reminding those behind the wheel that, if they’re caught, they could face severe penalties.

It doesn’t matter if you think you’re only speeding ‘a little bit’ – there’s no excuse for speeding.

There’s no excuse for speeding

Ways to stop going too fast

It’s always better to arrive late, than not at all. The risks from speeding are so serious, that it’s never worth it just to make up a little time.
Here are some simple tips to help make sure that you don’t need to speed.

For more information about the campaign, which is in association with Police Scotland, visit Road Safety Scotland's website.

Did you find what you were looking for?

Help us improve this website by leaving feedback on any information you couldn't find.